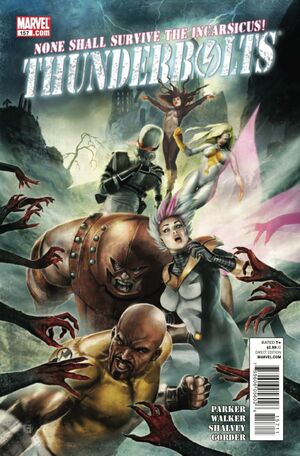 Eastern Europe. Castles. Witches. Werewolves. Satana is having interesting effects on her team members, The Thunderbolts – and now the daughter of Satan will lead them into the Occult! Back in the states, Songbird takes her initial crew of NEXT Thunderbolts out to see how they work together. Hint: It's not a good time to be in charge of Thunderbolts teams....

Retrieved from "https://heykidscomics.fandom.com/wiki/Thunderbolts_Vol_1_157?oldid=1730092"
Community content is available under CC-BY-SA unless otherwise noted.