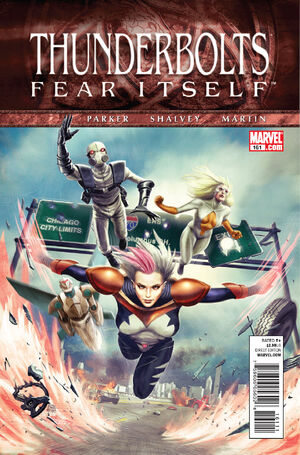 FEAR ITSELF TIE-IN Juggernaut has brought destruction to the American Midwest. His team- the alpha squad of the Thunderbolts – have caught the full fury of Cain Marko joined to the ancient force of The Serpent. It all comes down to this! A stand has to be taken and the worst threats of a lost age will face the worst threats of today- the combined squads of the THUNDERBOLTS! It's a major battle with major upheaval as members are transformed completely and others will reveal secret agendas-- and betray their team. This explosive finale will change the Thunderbolts in profound ways, and turn old friends into bitter enemies. Don't miss it!

Retrieved from "https://heykidscomics.fandom.com/wiki/Thunderbolts_Vol_1_161?oldid=1658100"
Community content is available under CC-BY-SA unless otherwise noted.