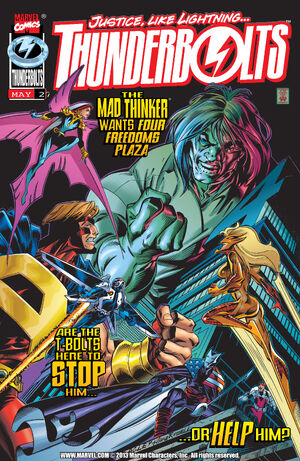 The Mad Thinker crashes a ceremony to honor the heroes fallen in the Onslaught war and kindaps Franklin Richards, the son of Mr. Fantastic and the Invisible Woman. The Thinker thinks he can use him to unlock the secret of the missing FF, but he didn't count on the intervention of the Thunderbolts. Plus: the team gets their first taste of fame and they like it.

Retrieved from "https://heykidscomics.fandom.com/wiki/Thunderbolts_Vol_1_2?oldid=1737686"
Community content is available under CC-BY-SA unless otherwise noted.