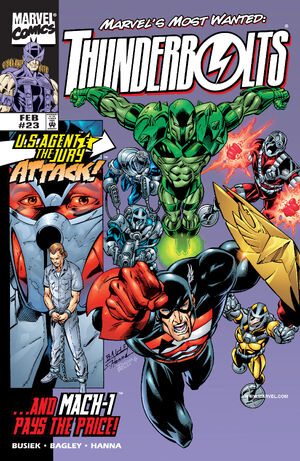 Who leaves the Thunderbolts? Who joins? Find out here as the U.S.Agent returns to take down the T-Bolts! In the aftermath of last month's clash with the Avengers, a Thunderbolt surrenders to the law to atone for his past misdeeds! But don't worry, the T-Bolt's new leader has a new candidate for membership - one that doesn't sit well with the rest of the team! Plus: appearances by the Jury and Charcoal, the Burning Man! And waiting in the shadows: the new Citizen V!

Retrieved from "https://heykidscomics.fandom.com/wiki/Thunderbolts_Vol_1_23?oldid=1464760"
Community content is available under CC-BY-SA unless otherwise noted.