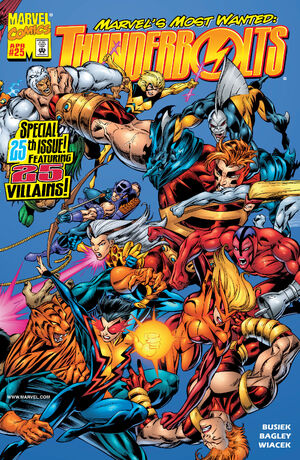 Appearing in "Saving the World!"Edit

THE SCOOP: It's the culmination of the ongoing plot threads since issue #18 as Hawkeye and the Thunderbolts and their former namesakes, the Masters of Evil, square off in a double-sized slobberknocker! THE STORY: They've bullied and bruised the Thunderbolts; now the new Masters of Evil are threatening the safety of the entire world! And who are the only ones in a position to stop them? You guessed it: their sworn enemies, the outnumbered and outgunned T-bolts! Plus: The Crimson Cowl - unmasked!

The Master of Evil are never seen agian until Secret Avengers #21.1

Retrieved from "https://heykidscomics.fandom.com/wiki/Thunderbolts_Vol_1_25?oldid=1750787"
Community content is available under CC-BY-SA unless otherwise noted.