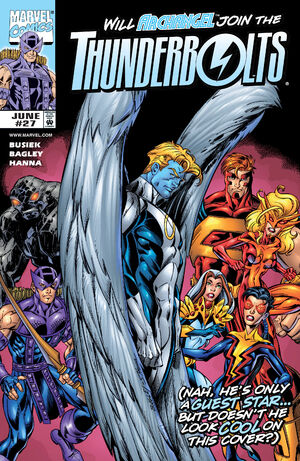 From the pages of X-MEN flies the Archangel! The Thunderbolts have a new headquarters, a new transport ship and a new mission: to prove themselves by taking down the biggest villains at large! Their first target: Graviton! Their surprising ally: the X-Man known as Archangel! Now that he's no longer hangin' with the X-Men, will Warren Worthington III join the T-Bolts?!

Retrieved from "https://heykidscomics.fandom.com/wiki/Thunderbolts_Vol_1_27?oldid=1644261"
Community content is available under CC-BY-SA unless otherwise noted.