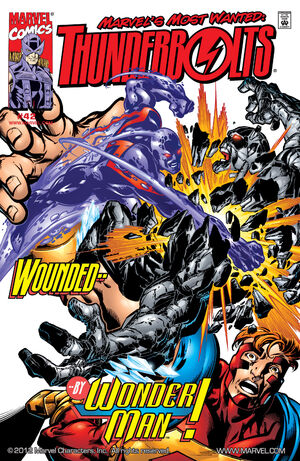 Erik Josten is having drinks at the Downslope Sports Bar and talking to "Wilma" the bartender. Suddenly, Wonderman shows up and starts pummeling Erik and destroying the bar. Wilma urges Erik to turn to Atlas and save himself and the bar. Erik is surprised that Wilma knows his identity. Erik then tells "Wilma" that she knows she is Man-Killer and asks for her super powered help. Man-Killer tells him that he wants no part of him, or the do-gooder Thunderbolts and reminds him that she and her true nature is as a "Man KILLER" and she has no interest in any romantic relationship with Erik.

At Burton Canyon High School, Charcoal sees the fracas and flys to help Eric. He tries to talk with Wonder Man, but instead Wonderman shatters his body with a heavy blow. The other Thuderbolts are also arriving on the scene as Charcoal reasssembles himself.

Simon has knocked Erik unconcious, and slips his ionic fist into Erik's ionic body and flys off. Hawkeye urges Mach II not to pursue Wonderman and states that he will call the Avengers and try to figure out what this is all about.

Retrieved from "https://heykidscomics.fandom.com/wiki/Thunderbolts_Vol_1_42?oldid=1513594"
Community content is available under CC-BY-SA unless otherwise noted.