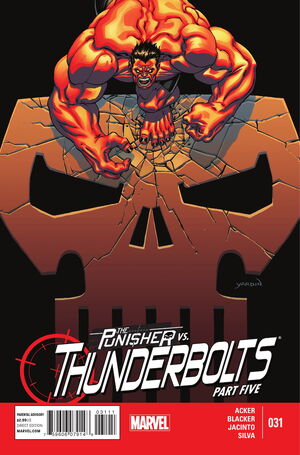 He set the bomb in Frank's apartment knowing that Frank would survive and come after you, after us. Destroy or kill the team and probably die trying. No loose ends, nobody to come after him. Why didn't you just tell us you didn't set the bomb, Ross?

Appearing in "The Punisher vs. The Thunderbolts: Part 5"Edit

THE PUNISHER VS. THE THUNDERBOLTS, PART FIVE!

• Soldier/monster vs. soldier/killer for the fate of the Thunderbolts team!

Retrieved from "https://heykidscomics.fandom.com/wiki/Thunderbolts_Vol_2_31?oldid=1542177"
Community content is available under CC-BY-SA unless otherwise noted.