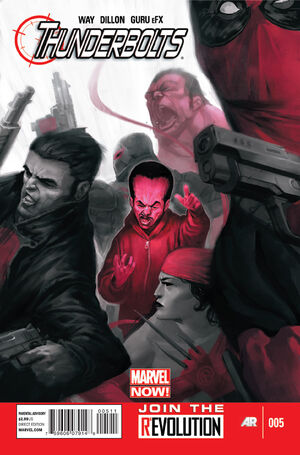 During the fight against Madman, Red Hulk decides to take the Leader to a pipe line that feeds Gamma energy to Madman's lab. Red Hulk then absorbed the energy himself and then forced fed it to the Leader, bringing him back to life.

• The Thunderbolts first mission is going off the rails! • Can the team trust the Red Hulk to lead them?

Retrieved from "https://heykidscomics.fandom.com/wiki/Thunderbolts_Vol_2_5?oldid=1464898"
Community content is available under CC-BY-SA unless otherwise noted.