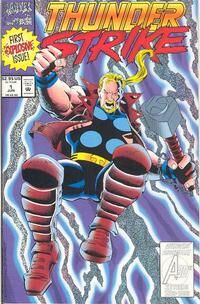 Appearing in "Blood Without Glory!"Edit

Synopsis for "Blood Without Glory!"Edit

A rash of carjackings in the city brings Eric Masterson and Bloodaxe to a head, with Bloodaxe coming out the victor. Determined to establish his own name and reputation, Eric changes costumes and names - Thunderstrike. During their next battle, Thunderstrike manages to disarm Bloodaxe and give him his own defeat.

Retrieved from "https://heykidscomics.fandom.com/wiki/Thunderstrike_Vol_1_1?oldid=1471526"
Community content is available under CC-BY-SA unless otherwise noted.