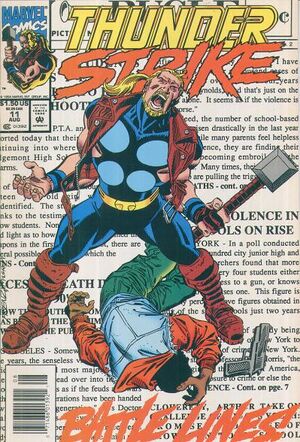 You are upset, Mr. Steele. Understandably so! I sympathize. I know what it means to lose a child. Believe me when I tell you that there is nothing more important to me that protecting the children! Absolutely nothing!

Joey Greves, a friend of Kevin's has brought a gun to school because there is a bully picking on him. Unfortunately, it goes off when he opens his locker and it falls out, causing a panic. Wildstreak and Thunderstrike butt heads when they both go after the same guy, Carl Washington, whose been selling guns to kids. But it's ultimately Sangre to kills him.

Retrieved from "https://heykidscomics.fandom.com/wiki/Thunderstrike_Vol_1_11?oldid=1471536"
Community content is available under CC-BY-SA unless otherwise noted.