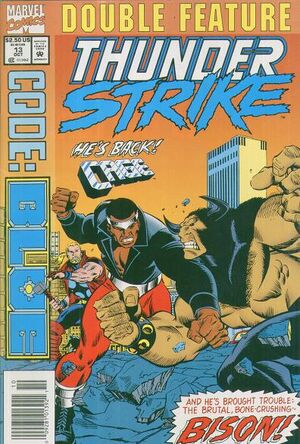 Appearing in "Man and Beast"Edit

Synopsis for "Man and Beast"Edit

Synopsis for "The Crack of Doom!"Edit

A Doombot shows up and begins rampaging through the city. Code:Blue is informed that due to city budgeet cutbacks, they are going to more than likely be shut down. When Jim Young tries to call the Fantastic Four or the Avengers to handle the Doombot, he gets no response, so he lets Code:Blue handle it. They manage to take it down with the help of the Yancy Street Gang. But when they get back to headquarters, Jim tells them that the city is being sued because of them and they cannot answer any calls without his express permission.