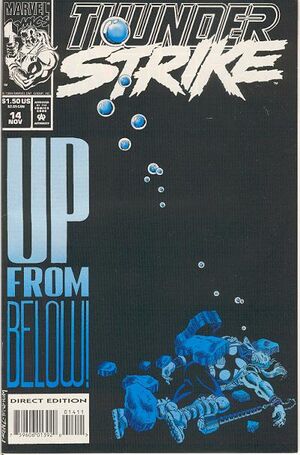 Appearing in "Up from Below!"Edit

Synopsis for "Up from Below!"Edit

The Wrecker has appeared from whatever dimension Loki and sent him to,[1] and is looking for revenge on his father, Burt. Code:Blue is attempting to stop when when they are ordered back to base by Jim Young, telling them that they are to have no operations at all without his express permission. Jim tells them that he got ahold of Thor, who is going to take care of the Wrecker without any cost to the city. Unfortunately, wherever the Wrecker had went to, gave him a new source of power, and Thor is hard-pressed to stop him. Thor gets a telepathic call from the High Evolutionary, telling him that he is needed back at Wundagore immediately. Code:Blue arrive back on the scene telling Thor that they have a plan and he's free to go if he needs to. He does so, and they decide to use Burt Garthwaite as bait, to lure the Wrecker in. They discovered that he hasn't completely materialized in this world from whatever dimension he had been sent to and has to keep concentrating on his hold here. Paul Conklin's boss tells him that Project 16 must be ready or else there will be massive layoffs in the company, starting with him. Shelley gets things set up with Burt just before the Wrecker arrives, and they trap the Wrecker in shatterproof cage just long enough, unfortunately, Burt has a heart attack and dies right in front of his son, causing the Wrecker to lose his grip and return to where he came from. Paul Conklin's boss tells him that Project 16, aka the Thermal Man, but be ready for the military on time.

Retrieved from "https://heykidscomics.fandom.com/wiki/Thunderstrike_Vol_1_14?oldid=1652617"
Community content is available under CC-BY-SA unless otherwise noted.