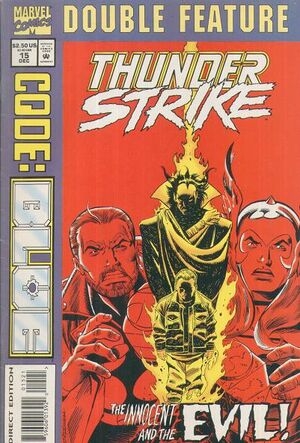 Youthful innocence must ever be nurtured! Children deserve only love and devotion -- and should be protected at any cost! In truth, they are our future. Our living legacy to the parade of endless tomorrows! So speaks Odin!

Appearing in "The Old Bait and Switch!"Edit

Synopsis for "The Old Bait and Switch!"Edit

Thunderstrike attacks an Asgardian caravan carrying the golden apples of Idunn. Mephisto has ordered him to steal one in exchange for freeing his son Kevin, but Eric can't do it. He figures out what Mephisto's plan is, and sets the stage. Mephisto really wants Thor's soul, so Eric alerted Hela that Mephisto is basically claim-jumping. While Mephisto is distracted, Odin frees Kevin from Mephisto's claim.

Appearing in "The Thermal Man Is Back!"Edit

Synopsis for "The Thermal Man Is Back!"Edit

Jim Redfield orders the Thermal Man to be activated and it begins running amok, killing civilians. Code:Blue rolls without the office of the mayor's approval, to try and stop it. Thunderstrike arrives to lend a hand, and they manage to defeat the Thermal Man, but Captain Conklin's husband Paul is killed in the attack.

Retrieved from "https://heykidscomics.fandom.com/wiki/Thunderstrike_Vol_1_15?oldid=1471541"
Community content is available under CC-BY-SA unless otherwise noted.