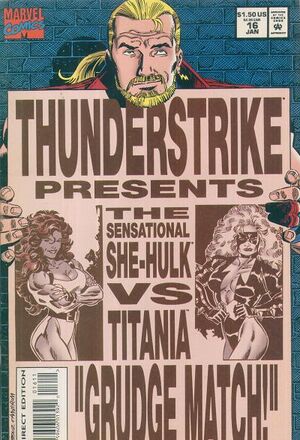 The law offices of Krask & Krask are suing the city of New York for millions of dollars in property damages. Unbeknown to them, their father Kronin Krask has returned as a form of living energy, and they only way to stop him is to call in Code:Gray! Oh yeah, and Daredevil and Code:Blue help too.

Retrieved from "https://heykidscomics.fandom.com/wiki/Thunderstrike_Vol_1_16?oldid=1659090"
Community content is available under CC-BY-SA unless otherwise noted.