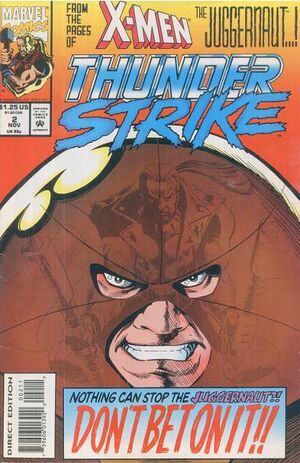 Thunderstrike has the Black Knight inspect the Bloodaxe to see if he can find anything unusual about it, but doesn't tell him that he hears it whispering to him. Elsewhere, the Juggernaut begins heading to GeneTech to get a medical file to help his friend Black Tom. Eric is determined to stop him, one way or another. Eric finds a peaceful solution to the problem and lets Juggernaut go on his way to help his friend.

Retrieved from "https://heykidscomics.fandom.com/wiki/Thunderstrike_Vol_1_2?oldid=1722999"
Community content is available under CC-BY-SA unless otherwise noted.