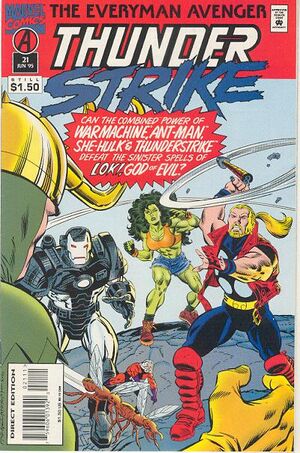 Appearing in "Pacts of Vengeance!"Edit

Synopsis for "Pacts of Vengeance!"Edit

Synopsis for "The Legacy! Part Two"Edit

thumb|right|Eric reveals his secret to his sonEric continues telling Kevin the story of when Thor was wrong. Thor confronts Garmund and his vandals, but it is Cedaric who drives them off. Cedaric destroys their dragon catapult and embarasses the vandals into leaving. Eric then tells Kevin that sometimes everyone is wrong, and it's okay to disagree with someone you love. He then reveals to Kevin that he is Thunderstrike by transforming in front of him. Which Kevin thinks is cool.

Retrieved from "https://heykidscomics.fandom.com/wiki/Thunderstrike_Vol_1_21?oldid=1687082"
Community content is available under CC-BY-SA unless otherwise noted.