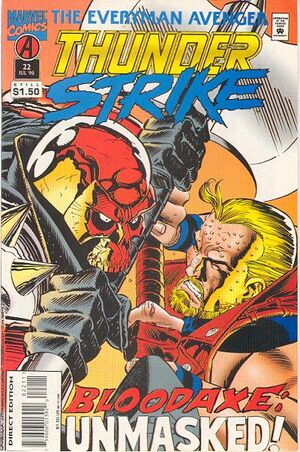 Ssssmokin'! SETH! Thunderstrike is coming for you! Watch your back snake man! Only one of us will walk away from this battle!

-- Thunderstrike after taking the Bloodaxe.

Bloodaxe is on a rampage looking for Seth, roughing up some of his lower level underlings. Meanwhile, Eric goes to see Bobby Steele, and they part amicably, with Eric shaking Bobby's hand. Later, Eric and Jackie have lunch together, and as they part, Eric spots Gary Paretsky acting strangely. He changes to Thunderstrike and decides to follow him, when he also notices Susan and Ed all separately, but all acting strangely. He overshoots Gary and looses track of him. Elsewhere, Jerry is at his construction site when two shadowy characters are seen hanging around. Jerry goes to tell them that it's not safe for them to be there, when they reveal themselves to be Quicksand and Mongoose, who promptly attack him, only to be saved by Bloodaxe. Bloodaxe is about to kill Mongoose, when Thunderstrike intervenes and saves his life. Mongoose is embarassed, and enraged, begins attacking Thunderstrike, while Quicksand and Bloodaxe face off. Code:Blue gets the alert, and rolls out to break up the battle. Thunderstrike knocks out Mongoose, and Bloodaxe has used the axe to change Quicksand into glass. Just as Bloodaxe is about to shatter her, she's saved by Thunderstrike, who manages to seperate Bloodaxe from the axe. He beats on him, and after sixty seconds, Bloodaxe falls over the side of a wall, while changing into Jackie Lukus. Eric is shocked when he sees her. Code:Blue and Gary arrive, and Gary reveals that he knew Jackie was Bloodaxe all the time when he attended the party and saw her find the axe and change into Bloodaxe. He then reveals that later the same night hew saw Eric Masterson change into Thunderstrike. Susan is dumbfounded to find out, and when Ed arrives, he tells them that he was just following Susan trying to keep her safe. Eric is overcome by all the shock, and remembering Bloodaxe and everyone else's words, picks up the Bloodaxe, changing into some sort of Thunderstrike/Bloodaxe amalgam, vowing to take down Seth.

Retrieved from "https://heykidscomics.fandom.com/wiki/Thunderstrike_Vol_1_22?oldid=1688792"
Community content is available under CC-BY-SA unless otherwise noted.