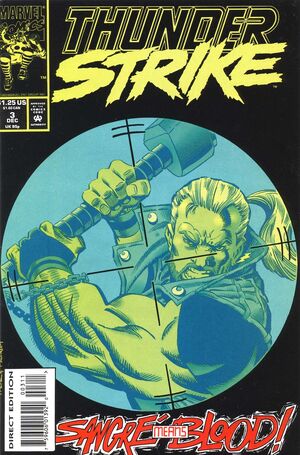 Revolting! To think that any sentient creature could resort to such depravity! These aberrations cannot be suffered!

A school shooting by a new vigilante named Sangre reveals a child pornography ring in the school. The target was Mr. Gerrins, one of Kevin Masterson's teachers. Thunderstrike and Code:Blue work together to break up the ring and capture one of the ringleaders, who turns out to be Armand Pelps, the School District Supervisor. They manage to save him from being killed by Sangre, but he is arrested in the end.

Retrieved from "https://heykidscomics.fandom.com/wiki/Thunderstrike_Vol_1_3?oldid=1471528"
Community content is available under CC-BY-SA unless otherwise noted.