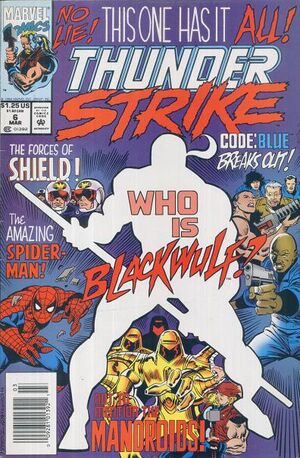 Appearing in "The Hidden War!"Edit

Synopsis for "The Hidden War!"Edit

Thunderstrike, Spider-Man, and Jock Jackson are talking to DePaul when Stellaris shows up and things go straight to hell. They manage to fight off the Mandroids until Nick Fury shows up and stops the skirmish. Inside the Helicarrier, Stone and the rest of Code:Blue manage to escape and make a copy of SHIELD files pertaining to Tantalus, Blackwulf, and a secret war that's being waged underground. Thunderstrike and Code:Blue go underground and get caught in a battle between Tantalus' agents and Blackwulf. Blackwulf tells them that he must go, but he left them a present - Pandara all tied up.

Retrieved from "https://heykidscomics.fandom.com/wiki/Thunderstrike_Vol_1_6?oldid=1723995"
Community content is available under CC-BY-SA unless otherwise noted.