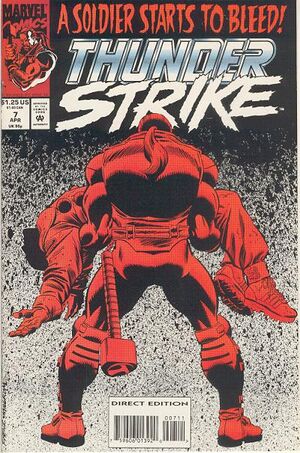 The case against Pandara doesn't look so good according to the Assistant D.A. Mr. Kim. They have no real evidence, just a bunch of chaos. Tantalus sends his hidden agent, Simon, to free her, and he is killed for his trouble. During her escape attempt, Pandara kills Andrew "Jock" Jackson, but she is taken down by Thunderstrike. When Eric finally gets home, Samantha Joyce tells him that Bobby Steele has kidnapped Kevin.

Retrieved from "https://heykidscomics.fandom.com/wiki/Thunderstrike_Vol_1_7?oldid=1723996"
Community content is available under CC-BY-SA unless otherwise noted.