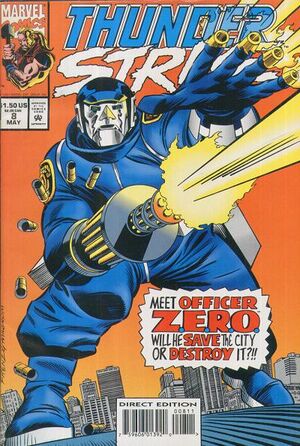 I used to look up to you Avengers guys. I thought you were heroes. My dad always taught me that violence never really solves anything! Only a bully picks on someone who's weaker! That's exactly what you are -- a big costumed bully!

Officer ZERO is created with the express intention of saving the lives of police officers. But he is getting a constant mental feed from his creator Thomas Rizzo, who harbors a secret hatred for cops because his brother Daniel was a cop killed in the line of duty, and Internal Affairs suspected a dirty cop, Daniel's partner at the time, Mad Dog. Elsewhere, Bobby Steele has kidnapped Kevin Masterson and is holed up in their bedroom. Eric summons Thunderstrike to free his son, but it just winds up being overkill, pushing his own son away from him.

Retrieved from "https://heykidscomics.fandom.com/wiki/Thunderstrike_Vol_1_8?oldid=1471533"
Community content is available under CC-BY-SA unless otherwise noted.