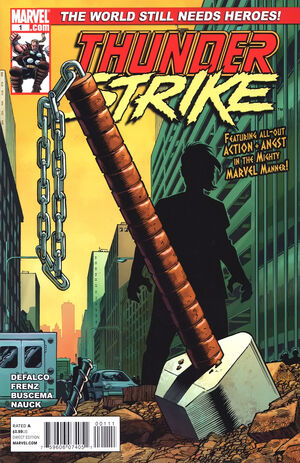 A proud legacy continues! Eric Masterson was the first to wield the enchanted mace called Thunderstrike and he sacrificed himself to save the world. But what happened to the mace? Has it been lost for all eternity or does the world still need heroes? Has the time finally come for someone else to follow Eric’s journey and take on the mantle of Thunderstrike? Join us as the Marvel Universe welcomes back the everyman Avenger, THUNDERSTRIKE! Guest-starring Steve Rogers, Sharon Carter and the rampaging Rhino!

In Valhalla, the transformation of Kevin Masterson into his father's form has alerted the Asgardians that the mace Thunderstrike is once again active. Hecara and Sif explain to Gruenhilda the importance of her mission - to teach Kevin how to be a hero.