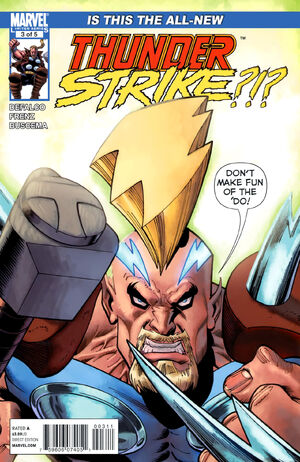 Are you criticizing my armor? I'll have you know that Mann Industries only employs the finest designers. Some of them have even been finalists on Project Runway.

Appearing in "And the Demi-God Decrees Death!"Edit

“AND THE DEMIGOD DECLARES DEATH!” Nobody ever said being a super-hero would be easy, but the new Thunderstrike just can’t catch a break. With Gruenhilda the Valkyrie criticizing his every move, the man who would be Thunderstrike begins a quest to recover his stolen mace. Along the way, he adopts a daring different persona, uncovers a plot to invade Olympus and soon finds himself in a fight for his life against a super-powered demigod who is on a mission of vengeance!

Retrieved from "https://heykidscomics.fandom.com/wiki/Thunderstrike_Vol_2_3?oldid=1471552"
Community content is available under CC-BY-SA unless otherwise noted.