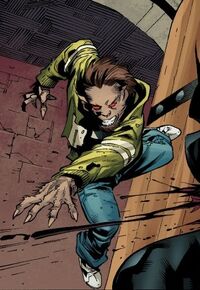 My name is Tier. I'm only a few months old but I'm already as functional as an average Twelve year old.
I have no idea what's going on, or why so many people are out to kill me.
But as the world turns white around us, I can't help but feel... as if I'm about to find out.

After Wolfsbane joined the X-Force she was captured and brainwashed by the Purifiers. X-Force rescued her and Rahne was resting in Angel's Aerie where she was found by the Asgardian Wolf Prince Hrimhari.[2] Former lovers, they rebuilt their relationship and slept together.[3] Soon, they were attacked by the Frost Giants and after the battle, Wolfsbane lost consciousness.[4] Faintly she called out for Elixir.

Hrimhari rushed her back to Angel's Aerie, where he is met by Archangel and Warpath who accompanied him to the X-Men base on Utopia[5]. Unfortunately, Utopia was under attack by Selene's undead mutants[6][7] and Elixir was in a comatose state due to the strain exerted by time traveling[8] and in healing Surge.[3]

Wolfsbane condition continued to worsen, and in desperation Hrimhari called upon the death goddess Hela.[9] Hela offered Hrimhari an even trade; a life for a life. Except she asked him to choose between his true love, Rahne, or their unborn child (which was the reason Rahne was dying). In the end, Hrimhari chose to exchange his life for Elixir's, knowing the Elixir could save both Rahne and his unborn cub. As Hrimhari and Hela disappeared he told a recovered Elixir to save Rahne and told her "I love her...and...I will find a way back to her."[10] To save Wolfsbane's life Elixir had to strengthen her body (to undefined limits) to endure the Asgardian embryo growing inside her.[11]

After the battle on Genosha with Selene and her Inner Circle, Rahne was removed from active duty on X-Force by Wolverine.[12] Wolfsbane fled Utopia.,[13] and returned to New York City to rejoin X-Factor Investigations. There she led Rictor to believe the child was his.[14] Soon they met with the Dr. Castillo, she was trying to examine an embryo by ultrasound, but sound couldn't penetrate Wolfsbane's body, and Dr. Castillo decided that it is a protective function, a mystical, rather than biological. After this, Rictor realized that the baby was not his.[15] At the same time the X-Factor had invaded Niffleheim, where Shatterstar fought with Hrimhari and learned the truth, that Hrimhari is the father of Wolfsbane's child.[16] When the team returned to their headquarters Shatterstar and Layla Miller convinced Rictor to still support Rahne, because despite her lying she still came to him for help, and he eventually forgave her.[17]

A few days later, Rahne and Shatterstar went for a walk, to talk about Rictor, but their conversation was interrupted when Rahne smelled blood in the church. They broke into a church and clashed with demon, the Sin-Eater, who claimed that due to the fact that Rahne's child would be born soon, the walls between dimensions weakened, and the demon was able to visit Earth.[18]

Outside the church they met the ghost of Feral having been returned to the world to serve as anchor for the demons and gods, which are hunting for Rahne's child. Cu Sith, Kasha, Okami and Bastet, all appeared immediately after that. Rahne and Shatterstar fought them off while Layla prepared the headquarters for mystic assault.[19] With gods, demons, and monsters baring down, Rahne was narrowly able to escape with Jack Russell, the Werewolf by Night.[20]

Russell and Rahne fled in his '57 Chevy Timber Wolf, and were attacked by Cerberus. While Russell fought off Cerberus, Rahne was able to flee. Shortly afterward X-Factor and Fenris arrived and joined the fight. Meanwhile, Wolfsbane was met by Agamemnon in the woods, who offered to help and shelter her in his home. Once inside, he bound Rahne in enchanted chains and locked her in a protective circle. Wanting the child, Agamemnon administered drugs to relieve Rahne's pain, and prepared a knife for a Caesarean-section. However, the birthing process was too far along, and the child was delivered through Rahne's mouth.[21]

Immediately after birth, the child attacked Agamemnon, causing Rahne to recoil in fear and revulsion. Her reaction frightened the child and he fled. Upstairs, Madrox and Banshee entered the house looking for Rahne. The child attacked them, and Banshee used her sonic scream on him, blasting him out of the house. In the woods where he landed, Hela found him, but the other gods and monsters met her shortly afterward, and a battled ensued. While they battled, the child hid. Later he was found by Russell, who intended to raise him as his own.[22]

Together Tier and Russell evaded several attacks from Darwin, who followed them across the country. Thanks to a magical amulet obtained from Hrimhari in Niffleheim, Wolfsbane, Shatterstar, and Rictor were able to find Tier and Russell and save them from Darwin and Vanora in the Sproul State Forrest in Pennsylvania. After the reunion and rescue, everyone was teleported to one of Wolverine's safe-houses in Nova Scotia where Rahne opted to leave X-Factor and remain with her son and Russell.[23]

With Darwin still hunting him, Rahne sent Tier to New York City while she and Russell tried to hold off their attacker. Rahne and Tier finally arrived at X-Factor Investigations Headquarters, but were quickly followed by Darwin, and later by Jezebel and Strong Guy. Without much explanation the entire party was transported to a mesa in the wilderness with the Hell Lords waiting to kill Tier and begin their war.[1] Tier battled and killed every Hell Lord who attacked him directly including Satana, Pluto, Hela and Satannish (although some credit can be attributed to them being weakened by their infighting and fighting with the X-Men), with Mephisto being the only one left. Before he could finish off Mephisto, he was stabbed in the back with a magical trident by Strong Guy. Tier vanished in flash of light, apparently dead.

Retrieved from "https://heykidscomics.fandom.com/wiki/Tier_Sinclair_(Earth-616)?oldid=1733318"
Community content is available under CC-BY-SA unless otherwise noted.