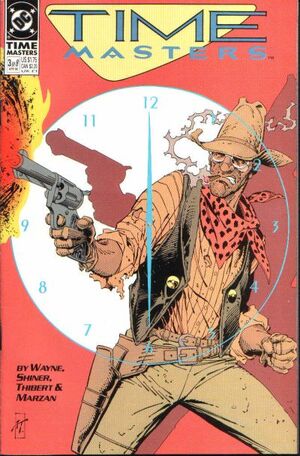 Am I going nuts? Is this some alternate timeline we've tapped into? Are these guys just the world's greatest liars? Or did this all really happen?

Appearing in "Time Has Come Today"Edit

Synopsis for "Time Has Come Today"Edit

1990. 10 p.m. Vandal Savage and the rest of the Illuminati leaders meet. One member tells Vandal that they've tracked Rip HUnter back from Washington D.C. and have found his lab. Vandal orders Rip and his team to be killed.

Corky, meanwhile, is fleeing a Tyrannosaurus Rex somewhere in the Jurrasic Era. Jeff communicates with him through the Time Pack and talks him through resetting the coordinates bringing him back to the present just in time but exhausting the Time Pack in the process. Jeff informs Rip who points out that Corky is no longer able to travel through time (as each method only works once per person). Rip has managed to identify the date and location of the photograph of Jeff as being Oaxcaca, Mexico on September 16, 1874. Because that is the date before Porfiro Diaz gets elected President for the first time, Rip suspects Diaz as being Illuminati. He also manages to identify Jonah Hex as a bounty hunter. The next morning, Jeff travels back in time and enters the Cantina where he finds Jonah Hex, Bat Lash and Scalphunter. They confront him, due to his color, and he shows them a polaroid picture and claims to be "a magician." After getting the bartender to take the photograph, Jonah suggests they take it (and Jeff) to see Diaz.

Retrieved from "https://heykidscomics.fandom.com/wiki/Time_Masters_Vol_1_3?oldid=1477491"
Community content is available under CC-BY-SA unless otherwise noted.