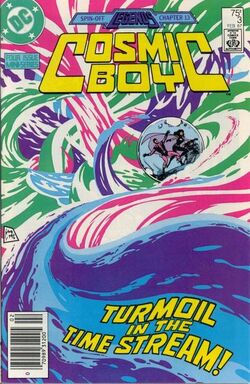 The Fourth Dimension is an abstract concept used in physics to identify and, when possible, quantify non-Euclidean space/time. Although it is a rare circumstance, it is possible for material from the Third dimension to physically pass through the Fourth dimension and navigate the environment as if it were a flowing tributary. In the case of living people, such individuals are referred to as time travelers. Like all realms of physics, manipulation of the Fourth dimension is adherent to a series of basic principles. Violation of these principles (such as using the Fourth Dimension to alter the past) often produces unwelcome, even disastrous results.

A group of chrononauts known as the Linear Men are known to police the Fourth Dimension.

A major aspect of the Fourth Dimension is the concept of Hypertime. Hypertime is a super-dimensional construct, which (under very limited circumstances) can allow versions of characters from one continuity to interact with versions from another.

For more complete information visit the DC Comics Database version of this article.

Retrieved from "https://heykidscomics.fandom.com/wiki/Timestream?oldid=1574616"
Community content is available under CC-BY-SA unless otherwise noted.