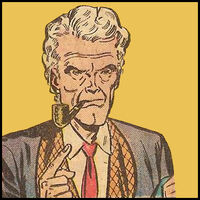 Tim is a former cowboy who gained stardom as a western hero during the silent movie days, however, he retired from films sometime after the death of his stunt woman wife, Linda's mother.

The elderly Turner lives primarily on his own on a ranch outside of Los Angeles. He has an affectionate relationship with his daughter, who he knows is The Black Cat, and occasionally advises her on her cases. It was Turner who taught his daughter how to ride and rope, skills she later translated into her stunt work. Though he is concerned for his daughter's safety, Tim Turner wholly approves of her activities as The Black Cat and her desire to bring justice to the world. Turner also dabbled after his film career as a private detective, but it’s unknown whether he was successful at it. He did teach some of his investigative skills to his daughter.

Retrieved from "https://heykidscomics.fandom.com/wiki/Timothy_Turner?oldid=1610924"
Community content is available under CC-BY-SA unless otherwise noted.