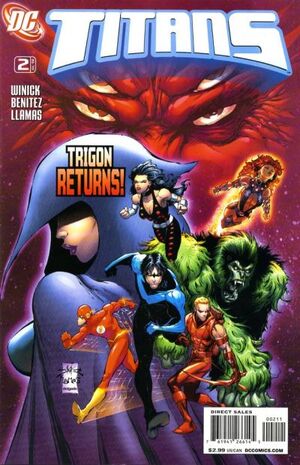 I'm good... although I would like Roy to explain why he threw an atomic bomb at me...

Appearing in "Family Affair (Part I) - All Together Now"Edit

Synopsis for "Family Affair (Part I) - All Together Now"Edit

An unidentified criminal organization holds Toni Monetti captive. Suddenly, one of their other experiments, a mutated shark man, breaks free and runs amok killing several guards. The Titans arrive and incapacitate the creature as well as several of the surviving henchmen. Making sure that Toni is safe, Nightwing tells her that something is targeting Titans of past eras. When she asks who the culprit is, Beast Boy tells her that Raven is looking into it.

Raven meanwhile, sends her spirit into the astral realm where she confronts her father Trigon. Trigon is a mere shell of his former glory, but even though he is greatly weakened, he is still extremely powerful.

The other Titans reconvene at the San Francisco tower. Cyborg is back up and running, but his torso is plugged into a hover-chassis until he can get a set of legs back together. Nightwing asks him about the attack on Titans Island. Vic doesn't have any answers except to say that he only invited Power Boy onto his team so he could keep an eye on him. Now that he's dead, he has no idea who might be orchestrating an attack against them. Wally tells Dick that he tried to locate Garth, but nobody has seen him since Ollie and Dinah's wedding. Suddenly, they hear a shriek of agony coming from Raven's room. The Titans rush to check up on her, but when they do, she reveals that she has just discovered that she has heretofore unknown siblings who are now active upon the Earth. It is the Sons of Trigon that are responsible for the attacks against the other Titans.

Retrieved from "https://heykidscomics.fandom.com/wiki/Titans_Vol_2_2?oldid=1466913"
Community content is available under CC-BY-SA unless otherwise noted.