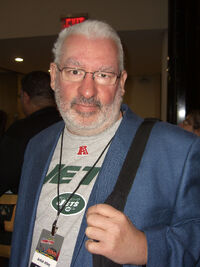 DeFalco was born in Queens, New York City, New York, United States. The DeFalco family owned a supermarket. He was introduced to comic books at the age of five, when an older cousin read an issue of Batman to him.

He began his career with Archie Comics, where he wrote for Archie and other titles including Scooby-Doo.

He later joined Marvel Comics, where he would spend the next twenty years of his career. DeFalco was the chief designer and author for Dazzler, and later became one of the most popular writers for the Amazing Spider-Man series while at the same time rising through the editorial ranks. DeFalco succeeded Roger Stern as writer of Amazing Spider-Man, and his 1984–1986 run, in collaboration chiefly with artist Ron Frenz, remains one of the series' best periods. DeFalco and Frenz were both unceremoniously and abruptly removed from Amazing Spider-Man by then Spider-editor Jim Owsley, under the orders of Marvel Editor-in-Chief Jim Shooter. DeFalco also wrote a Machine Man limited series in 1984, with art by Herb Trimpe and Barry Windsor-Smith.

As with several others who held the post, DeFalco became one of the public faces identified with a number of controversial decisions taken by Marvel in the period, and he is sometimes held responsible for them in fan circles. He was a key member of the management team that took Marvel public, and under his leadership, Marvel's net profits from publishing rose by over 500%. Under DeFalco's guidance, Marvel entered a phase of expansion that provided an opportunity for an army of "new talent" to enter the comic book industry. After clashing with the company's upper management, DeFalco was fired in 1994. During the year following his departure, Marvel decided to distribute its own comics and sales on most of Marvel's core titles sagged. At the same time, the company's finances entered a crisis point amidst accusations that owner Ronald Perelman had strip-mined the company for his own gain. Initially the position of overall Editor-in-Chief was scrapped in favour of breaking the line into five sub-sections with their own group editors. In late 1995, the post was restored and filled by Bob Harras.

During his tenure as Editor-in-Chief, DeFalco had continued to write as well, with noted runs on Thor (where he created the New Warriors with artist Ron Frenz) and the spin-off Thunderstrike, as well as Fantastic Four. His dismissal coincided with a run on Spectacular Spider-Man which he subsequently swapped for Amazing Spider-Man. During this time he helped co-write the controversial and much maligned Spider-Clone Saga which revealed (temporarily, at least) that Peter Parker was a clone of the original that had been active since 1975. Peter would be replaced by the original Spider-Man under the alias "Ben Reilly". However, following several changes of creators and fan reaction, this was soon reversed.

DeFalco is also the author of over a dozen graphic novels, several hundred comic book stories, several dozen cyber-comics, three novels and six children's books, including the best-selling Spider-Man: The Ultimate Guide and Hulk: The Incredible Guide. DeFalco has personally created and developed over three dozen characters that have all been licensed for television, toys, t-shirts, posters, trading cards and other merchandise. He also worked with toymaker Hasbro on the G.I. Joe toy line, its animated show and was also part of the team that introduced the Transformers to the American public. DeFalco also created Spider-Girl, writing her series through most of the time.