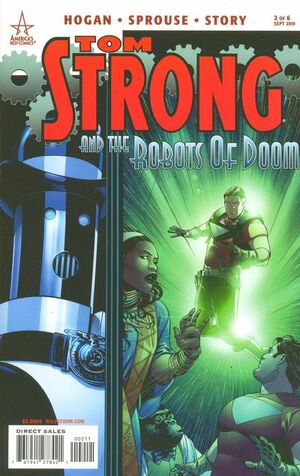 Look, every menace I've ever fought has sounded like something from the pulps... It didn't make them any less dangerous.

While throwing punches at each other during a boxing match, prompted by Albrecht Weiss, Albrecht reveals to his father how the Dero robot army aided him in taking over the world.

After the sparring, Tom is chained back inside his cell, where he learns that his robot servant, Pneuman, was never reprogrammed. The loyal robot not only frees Tom from the dungeon, but also presents him with a Time Harness.

Tom then goes back in time (1939) to stop Albrecht before he teamed up with the Dero. When the elder Tom meets his younger self, they discover that the time travel has weaken him. They agree to work together, but decide to wait for the morning, so the elder can get some rest and gather some strength.

Retrieved from "https://heykidscomics.fandom.com/wiki/Tom_Strong_and_the_Robots_of_Doom_Vol_1_2?oldid=1474478"
Community content is available under CC-BY-SA unless otherwise noted.