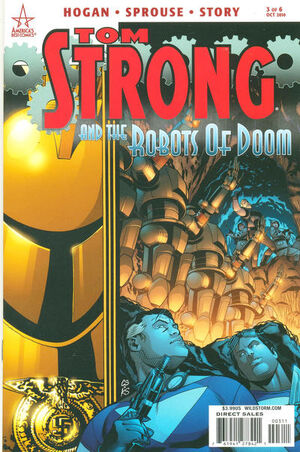 Tom Strong, elder & younger, agree to team up to prevent Albrecht Weiss from discovering the Dero robots. They find their way into an underground cavern, and soon realize that they are too late. Albrecht has already negotiated a deal with Dero Prime, and an army of other Deros are gathering around him ready to "cleanse" the world of "bad men." While the two Tom Strongs spy on the gathering below, the elder Tom suggests that he seek out his old nemesis, Dr. Permafrost. He finds him in a prison cell and blasts him out. The two then fly away in a helicopter.

Retrieved from "https://heykidscomics.fandom.com/wiki/Tom_Strong_and_the_Robots_of_Doom_Vol_1_3?oldid=1474479"
Community content is available under CC-BY-SA unless otherwise noted.