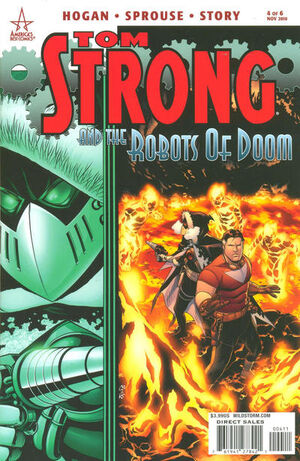 Appearing in "By Lava's Lamp"Edit

Synopsis for "By Lava's Lamp"Edit

The elder Tom Strong succeeds in having his old foe Dr. Permafrost break out of jail. He has enlisted his help to stop his own Nazi son, Albrecht, from ruling the world. The two team up and drill below the Earth to seek out more help against the army of Dero robots, which are now under Albrecht's command. There, they ask for the Salamanders' (Lava Men) aid. They agree to assist in the fight, as it is revealed they are the creators of the Deros.

Meanwhile, the younger Tom is still within the Dero's underground cavern and has found himself in the clutches of the evil Albrecht.

Retrieved from "https://heykidscomics.fandom.com/wiki/Tom_Strong_and_the_Robots_of_Doom_Vol_1_4?oldid=1474480"
Community content is available under CC-BY-SA unless otherwise noted.