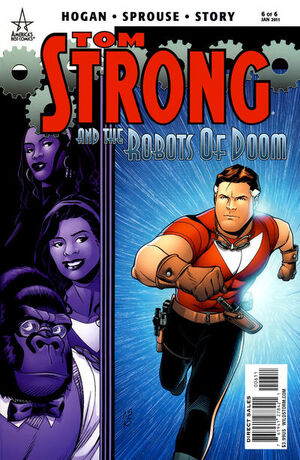 Solomon, please sit on Albrecht while I decide what to do with him.

Appearing in "Everything That Happens Will Happen Today"Edit

Synopsis for "Everything That Happens Will Happen Today"Edit

Tom's different versions of himself merge into one another, and he finds himself in the present time. However, he senses his mission of stopping his son's desire to rule the world has not been completed yet. As the rest of the Strong family continue to pack for their daughter's wedding ceremony, Tom commands them to join him in the Hyper-Saucer. He realizes that Albrecht is traveling into the past today, to change history. They confront Albrecht and his Nazi mom, Ingrid Weiss, inside the underground cavern full of Dero robots. They quickly apprehend the evil pair and take them to a far off prison, Aztek Empire Outpost.[1]

Later, the Strong family celebrate their daughters marriage and she announces that she is pregnant. Later still, Tom visits his new ally Pluto Parulian in the hospital to see if he is recovering from his severe wounds caused during the battle of the Deros.[2] The two speak and realize that perhaps they should be friends.

Retrieved from "https://heykidscomics.fandom.com/wiki/Tom_Strong_and_the_Robots_of_Doom_Vol_1_6?oldid=1474482"
Community content is available under CC-BY-SA unless otherwise noted.