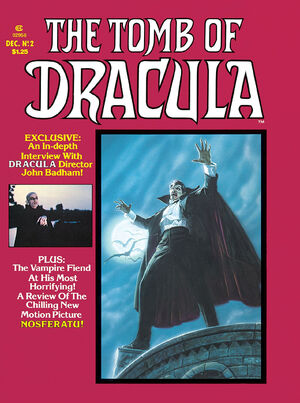 Appearing in "The Dimensional Man"Edit

Synopsis for "The Dimensional Man"Edit

Elsewhere a medium named Angela -- Joshua's sister -- senses the death of her parents and cries out, breaking seance that she is conducting. Dracula enters the room room and sends the other people home and escorts young Angela back home, listening to her premonitions of danger. Dracula offers her his aid should she only call his name, and tells her that he is truly count Dracula before leaving her in his bat form.

Returning to her home, Angela is captured by members of the Enclave cult who have come to take her as a sacrifice to their master a demon known as Asmodeus. Angela, wanting no part in the Enclave's plans refuses, but she is taken as their prisoner despite her protests.

Meanwhile, Dracula is out stalking a fresh victim and comes across a young woman trying to push off the advances of a male companion in an alley. Using his hypnotic powers, Dracula entrances the girl and easily bats her unrequited suitor aside. The woman takes Dracula back to her home, and misunderstanding Dracula's interest in her, strips off he clothing and gives herself openly to him. Regardless of the misunderstanding, Dracula easily feasts on the woman and leaves her dead. His departure is witnessed by the Dimensional Man who has tracked the Enclave cult back to their hideout where they are forcing Angela onto an inverted cross. Trying to fight them off, Joshua is stopped by their leader Damien who uses his magical powers to stop Joshua's attack.

Damian reminds Joshua of his origins: How his parents Hungarian Jews that were fleeing the Nazi's during World War II. They would be granted safe haven from the Gestapo from Damien, under one condition: That they give up their beliefs to worship the Anti-Christ and makes them put the sign of the inverted cross on their foreheads using Damien's own blood. Seeking to survive the atrocities brought on by the Nazi's, Joshua's parents agree and through Damien's magic they were rendered invisible to the Nazi's who searched Damien's home.

Over the years they would migrate to America where Joshua's mother would become pregnant with twins: Both Joshua and Angela. Both children would be born with inverted cross birthmarks, marking their true heritage. While Joshua believed in the teachings of Damien and the coming of Asmodeus, Angela did not and one day during a mystical ceremony Joshua would be turned into the Dimensional Man to act as the vanguard for Asmodeus' coming and prepare his sister to be Asmodeus' bride.

While elsewhere, Dracula sense that something is amiss and is risen from his coffin. When he draws the curtains he finds that the sun is still setting and is burned by it's light. Dracula manages to close the drapes but passes out before he can return to his coffin. His screams are heard by the hotel housekeeper who goes into Dracula's room to find out what the commotion is. Finding Dracula's unconscious body on the floor, she assumes he is dead and reaches for the telephone. However, before she can call for help, the sun sets completely and Dracula springs alive and chases the woman outside to feed upon her. In chase the woman falls off the roof of the hotel, however Dracula manages to feed upon her by turning into bat form and grabbing her mid-fall and feeding upon her before she hits the ground.

After his feast, Dracula is summoned by Angela and is drawn to her location. There he finds the Enclave has successfully summoned Asmodeus, a formless demon that is already mating with Angela. Dracula fights off the cult members, but is barred from saving Angela by Joshua who is in Asmodeus' thrall. The Dimensional Man attempts to drain Dracula's energy, but the vampire king is not as easy victim and lashes back by summoning lightning to strike Joshua, burning away his clothing. Dracula is able to escape by turning into mist and drifting to safety.

Hearing Angela's please for help, Joshua attacks Asmodeus, and while he attempts to drain the demon's energies, Dracula pulls Angela free and flees the scene while Joshua is pulled back into the dark pit by Asmodeus, back to where the demon was summoned. His last sight is Damien standing over the pit and Joshua begins to weep because he believes that Hell on Earth has only just begun.

Appearing in "Court of the Dead"Edit

Synopsis for "Court of the Dead"Edit

1459: Dracula has invited the Murad the Sultan of Turkey to Castle Dracula to have a dinner with him. Although the Sultan does not think highly of Dracula's Wallachian background, he comes anyway. Dracula takes Murad and his men to a dinner table where they are served by Dracula's loyal female servants. Murad and Dracula exchange barbs over the meal, Murad believing it to be poisoned, and Dracula quipping about how the obese sultan could turn down this meal. The Sultan gets fed up with the insults and demands to know why Dracula had summoned him. The Sultan would come to regret this as he falls victim to Dracula's hypnosis. Dracula's women then lead off the Sultan's men so that they can speak in private.

Dracula recounts to the Sultan of a time some fifteen years ago when young Vlad Dracula was on a diplomatic mission with his father Vlad the Elder and his brother Radu. They would be ambushed upon crossing the Turkish boarder and taken prisoner and brought before the Sultan. The Sultan would explain to Vlad the Elder that he has grown bored of the constant war between their two kingdoms and has decided that he will kill Vlad's two sons, and has Vlad the Elder returned to his kingdom and young Dracula and Radu imprisoned in the place dungeon. The two boys would be humiliated and tortured, and eventually young Radu would eventually die.

Meanwhile, Vlad the Elder meets with his statesmen and calls that the war between the Turks end because he is not willing to sacrifice his own sons lives. Although the decision is unpopular his statesmen agree, however that night one of them sneaks into Vlad the Elders room and assassinates him.

While back in Turkey, Dracula manages to break free when a guard gets too close to his cell allowing him to strangle the guard to death and steal his keys. Dracula would then escape the palace and manage to return to Transylvania where he would take over his fathers throne. As his first act as ruler he had the men responsible for his fathers murder impaled and then would resume the war effort against Turkey.

With his story finished, Dracula releases the Sultan from his hypnotic gaze and reveals to the frightened Sultan that he is a vampire and lord of the undead. He then chases after the Sultan who tries to get his guards to aid him but finds them being fed upon by Dracula's women. The Sultan tries to stab Dracula through the chest with his scimitar but it has no effect. Dracula then mockingly removes the blade and breaks the sword in two with his bare hands. The Sultan is further horrified to find that his own men have now been changed into vampires loyal to Dracula. Dracula then pounces upon the Sultan and feeds upon him until he is dead.

Taking the Sultan's body outside, Dracula presents it to the Turkish army that waits outside for their leader's return. Dracula mocks them and vows their destruction before tossing the lifeless body to the ground. When the army fires an onslaught of arrows at Dracula, he simply transforms into bat form and flees the scene, laughing the whole way.

Retrieved from "https://heykidscomics.fandom.com/wiki/Tomb_of_Dracula_Vol_2_2?oldid=1680750"
Community content is available under CC-BY-SA unless otherwise noted.