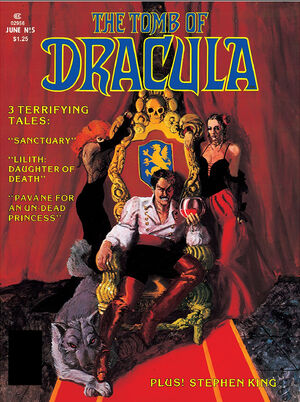 Romania, present day, a swarm of vampires chase after a young woman and her daughter. The fleeing humans attempt to seek sanctuary in a nearby church, however they are killed before the resident priest can answer the door. When he does, he is in for a horrifying shock: the vampires have picked the woman and her daughter clean of all their flesh, leaving nothing but skeletons left. The vampires return to Castle Dracula where they give worship to their master Dracula. Dracula is far from amused, still furious with his followers due to their brief defection and loyalty to the now decease usurper, Torgo. When one of the female vampires attempts to offer Dracula sexual favors, he kills her and tosses her carcass to the other vampires who greedily feed upon her body. The sight disgusts Dracula, and he mocks them for calling themselves his children as the only child he knows is his daughter Lilith, whom he will on day deal with. Mention of his daughter causes Dracula's thoughts to begin to drift back hundreds of years ago, when he was still married to the hated Zofia. One day he forced Zofia to bring their newborn daughter Lilith outside of the castle so that the child can view those that Dracula had impaled so that his daughter can begin to learn why her father is called the Impaler.

Returning his thoughts to the present, Dracula notices that the dawn is coming and prepares to return to his coffin to rest. His vampire legions notice the rising sun and beg him to allow them to take sanctuary in his home. Dracula refuses in punishment for their past transgressions and orders them all to leave the castle. Unable to resist Dracula's commands the vampire legion flee the castle and are all destroyed by the dying son. Arriving on the scene is Lilith, who is immune to the sunlight, and she witnesses the death of all her fathers followers. Witnessing this display, she decides that this is an ideal moment to attack her father soon and retreats into the woods. Her mind drifts to the past as she recalls how her mother was abused and tormented by Dracula, who did not want their marriage to begin with. This would eventually drive Lilith's mother to kill herself. Just before her mothers death Lilith was put in the care of Gretchen, a gypsy who's son was killed by the now vampiric Dracula. In revenge, Gretchen would cast a spell to mystically turn Lilith into a vampire more powerful, and with less weaknesses than conventional vampires. She would war with her father for centuries before an eventual, all be it uneasy, truce was formed between the two. Eventually Lilith would be destroyed however he soul would seek out a host body so that she could continue her vengeance. She would find this in Angel O'Hara, a woman abused by her father for getting pregnant. While Angel would meet Martin Gould and form a relationship, Lilith would operate by night attempting revenge against her father. Lilith's final recollection is of her last encounter with her father, just after his powers had been stripped by Satan, and how he came to her to have them restored and how she renounced them. Hearing that her father had been restored as king of the Vampires, she decided to begin hunting her father once again.

That next afternoon, Lilith seeks out Victor Benzel, the direct descendant of Gretchin, the woman who turned Lilith into a vampire. She has come to seek his help, however he has given up his heritage to become a simple musician, and questions to her why he would want to help Dracula's offspring. She tells him that she seeks her fathers destruction. With this, he invites her to stay for dinner and soon the two have a night of passion. Afterword, Lilith drives home to Victor what she truly is and asks once more for his help. Victor agrees to aid Lilith in anyway possible and their first order of business is separating Lilith from Angel O'Hara. After many repeat attempts, Victor finally manages to come up with a mystical means of separating the two women. Victor dresses the unconscious Angel and goes to drop her off in a hotel where she will awake with no memory of how she got there and with money to get her back home. After the ritual is done, Victor tells Lilith that she must see his friend a man named Karl who can reverse Lilith's vampirism. However she refuses the offer for now as she needs her abilities in order to kill her father.

Traveling to Castle Dracula before dusk, she hides out in Dracula's former sleeping quarters. When Dracula rises and is lost in thought over his past loves, he comes into his room and notices that someone is in there. Pulling away the beds curtain to reveal Lilith, who mockingly asks Dracula if he's willing to add incest to his list of sins and then attacks him. Her initial attack is fierce and catches Dracula off guard. However she breaks off the attack and escapes into the main hall of the castle in mist form. When Dracula follows after her, she attacks him with a crucifix and holy water (items which Lilith are immune to), however Dracula regains himself and attacks Lilith directly. She manages to throw the enraged Dracula off her and their battle continues. As they fight on Victor arrives wanting to help Lilith out and attempts to attack Dracula with a crucifix as well as a stake and hammer. He does not fare very well, and soon has his neck snapped by Dracula, killing him instantly.

Furious, Lilith grabs the stake and hammer and Dracula simply opens his shirt and tells her to strike. Lilith soon finds that she cannot, and Dracula mocks her. He tells her that she is a slave to him like any other vampires, and that all the moments that he appeared to be weak were tricks to her. He mockingly laughs at her and flees in a whisp of mist leaving her to reflect on her defeat.

Appearing in "Pavane For An Un-Dead Princess"Edit

Synopsis for "Pavane For An Un-Dead Princess"Edit

Odette Byelai was a famed ballerina, who while attending a party one night would be seduced by the vampire lord Dracula, who would call himself Vlad Tepesch. He would bring her outside where he would fed upon her and leave he dead body. She would revive three days after unaware that Dracula had turned her into a vampire. Realizing she would be late for her performance she would rush to the theater. Getting ready for the performance, she would be offered coffee and realize that she wanted blood and would rush out into alleyway. There she would run into "Tepesch" who would reveals his true identity and explain that he turned her into a vampire.

Furious over what Dracula had done to her, she would attempt to attack him but find that he has control over her and forces her to transform into bat form. However she manages to fight this transformation and restore her human form. Amused, Dracula would allow her to carry on this charade. Odette would resume her dancing career, trying to control her blood lust and make focus on being able to transform into something beautiful. After much practice she would soon master the ability to change not into a bat, but a feathered bird form.

As she would continue her practices, she would also find that she has now lost her enjoyment of music, finding that she only hears noise. Furious, she gives in to her blood lust and goes out into the night where she feeds on a lone man walking by himself. At first she revels in the sensation of feeding on a fresh victim until she realizes what she has done and is mortified.

Seeking advice she would go to her choreographer to try and get his help, she would reveal her ability to change into a bird and the two would work together in performing a rendition of the Swam Princess. On opening night, Odette would put on her performance, unaware that Dracula is watching from the balcony above. During the part of her performance where she would use her abilities to change into a swan, Dracula would force her to transform into a bat creature, causing her to flounder to the ground. Unwilling to be under Dracula's control, Odette would break a splinter of wood and use it to impale herself through the heart.

Thinking this is part of the play the audience would give Odette a standing ovation and she would die with a smile upon her face. Dracula would be also on to applaud her as well all be it impassively.

Retrieved from "https://heykidscomics.fandom.com/wiki/Tomb_of_Dracula_Vol_2_5?oldid=1465017"
Community content is available under CC-BY-SA unless otherwise noted.