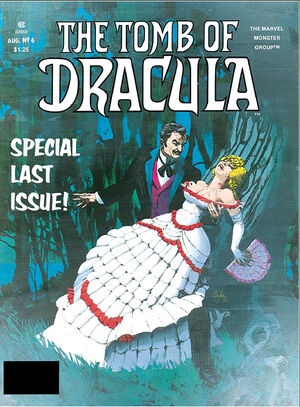 Appearing in "A House Divided"Edit

Synopsis for "A House Divided"Edit

September 13, 1862: Dracula is taking a ship from his native Transylvania to Savannah, Georgia in the United States. Dracula's presence aboard the ship spooks the crew who have seen him speaking with the rats aboard the vessel. Two of the crew members discuss how their strange employer had purchased the ship for three thousand gold pieces and had them launch within three days, however before preparing the ship for sailing one of their employers commands were that all religious symbols be removed from the vessel. Stranger still was when they were ordered to bring aboard a coffin among other items. When one of the ships crew would find a painting of an American girl among their employers effects, Dracula would attack him, proving to all aboard that they were dealing with a man of above normal strength. With the story done, one of them figures that Dracula is smuggling gold to the Rebels who are fighting the Civil War in the United States. Deciding to check and see if Dracula's coffins have this supposed gold, the man soon becomes a fresh victim of Dracula, when his legion of rats inform him of the snoop.

When they finally arrive in America, Dracula stays with the wealthy Nathan Beauregard, a Confederate supporter and a wealthy merchant. When Beauregard insists that Dracula turns over the ship to the Confederate cause, Dracula initially refuses however allows him to take it however insists that he will take what he needs as well. Dracula then departs, both putting fear into Beauregard's woman Sarah and interesting her at the same time. That night, Dracula is visited by Beauregard's slave woman, who has been come on her masters orders to satisfy Dracula's needs. Dracula feeds on her briefly, however does not kill her, finding more interest in Beauregard's wife. Dracula then returns to the Beauregard home and uses his hypnotic abilities to get another one of Nathan's slaves to invite Dracula in, Dracula then swiftly kills the slave and goes up to Sarah's room.

There, Dracula seduces Sarah and feeds upon her. When Nathan returns to find his slave dead, he goes up with a gun into Sarah's room. Dracula proves impervious to the roar of Nathan's guns and Dracula easily slays his attacker. He then has Sarah accompany him to transport his coffin and other possessions from the ship taken by Nathan to bring to the Inn where he is staying. Along the way they are searched by Rebel soldiers and allowed to pass. When Sarah's subservience to Dracula annoys the vampire king, he orders her to drown herself in a nearby lake before resuming his travels to the Inn. There he unpacks his belongings, including the painting -- of young Annabelle St. John, whom he hopes to meet the following night.

The following night, Annabelle's father throws a party celebrating her return from Europe and puts a dance with her on action with the proceeds going toward the Confederate war effort. When Dracula arrives at the party, he outbids everyone by offering one thousand dollars in gold. As Dracula dances with Annabelle, the women find the mysterious foreigner interesting, while the men (Mostly Confederate soldiers including Annabelle's brother Cornelius) don't like him.

Unimpressed with Dracula's obvious interest in his daughter, Mr. St. John thanks Dracula for his contributions to the Confederacy. When Dracula tells him that he is uninterested in the war, the two men drop the pleasantries and St. John tells Dracula that his daughter is not for sale. When Dracula asks for an audience with St. John's daughter, he refuses but tells him he can see her tomorrow with a proper chaperon. Dracula leaves, furious at being denied the audience of the woman who has captured his feelings. However, Dracula's blood lust has crept up on him and he flies off to find a fresh victim and feeds upon two Confederate sentries. As he feeds, he is unaware that he is being watched by a man named Openheimer, who left his native Austria to escape from the horrors that Dracula brought to his home continent. When Openheimer goes for a drink, he tells his fellow soldiers that there is a worse enemy out there than the Union Forces, however they refuse to believe him.

Dracula returns to the St. John Plantation shortly after to see the Confederate soldiers there going out to battle the Union Forces. Dracula goes to the house and orders the slave woman to let him in and grant him audience with Annabelle. Inside he learns that her father has gone off to plan strategy for an attack and the two talk of their brief meeting in Vienna. Dracula confesses his love to her, but she tells him that she cannot follow his feelings as she is providing moral support for her father and brother in the war against the Union. Dracula informs her that the Union Forces will likely slaughter her family and their army and that the enemy would occupy their home. Annabelle tells Dracula that she would rather die than let that happen, and Dracula realizes that in order to obtain his prize he would have to get involved in the Civil War.

Dracula would appear before the Rebel Forces and use his hypnotic powers to put them under his control. He would lead them into attacking the Yankies with an army of bats, rodents and other creatures of the dark following them. The attack would be a complete success and those the Rebels would not kill would be forced to flee when they would light fire to the camp.

Gloating over his easy victory, Dracula is then confronted by Openheimer who tries to attack Dracula with a gun that fires silver bullets, a cross and a stake and hammer. Dracula fights off Openheimer and has him struck down by a bolt of lightning that he summons down. He then orders the soldiers under his control back to the St. John Plantation. Having watched the battle by binoculars the elder St. John and his son witness Dracula change into his bat form and realize that the vampire king is going after Annabelle and rush back to the plantation themselves.

Arriving before Dracula, Cornelius and his father learn that Annabelle promised her hand in marriage to Dracula if he helped defeat the Yankies. Horrified to learn the truth, St. John would prepare an ambush for Dracula, having his slave toss a net on the vampire lord and keep him weakened with crosses and garlic. St. John would then drive a stake into Dracula's heart causing him to dissolve into a skeleton. They would then retire and plan on stuffing Dracula's head with garlic and chopping it off at sun rise. Hearing this, Annabelle would sneak out and remove the stake from Dracula's heart.

Even though she realizes what Dracula truly is, she agrees to return with him to Europe, hoping that love will conquer his evil nature.

Appearing in "Violets For a Vampire"Edit

Synopsis for "Violets For a Vampire"Edit

Retrieved from "https://heykidscomics.fandom.com/wiki/Tomb_of_Dracula_Vol_2_6?oldid=1465018"
Community content is available under CC-BY-SA unless otherwise noted.