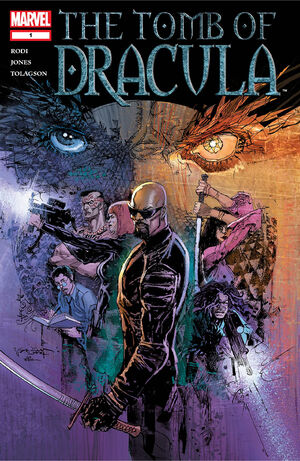 Blade tracks a not-quite-human, not-quite-vampire woman to a bar. When he gets there she is attacked by a vampire named Hector, who Blade quickly disposes of. He then finds out she has left. Blade follows her back home, the two fight and then nearly kiss but are interrupted by a video call for her from a man named Noah. She leaves to see Noah.
Where Noah is, he introduces the team members for his mission, Benjamin Soloman Alomii who specializes in hunting the adze vampire and killed his vampire wife and children, Michiyo Watanabe who specializes in hunting the Yikki Onna (Asian snow vampire), she is hunting for the one that killed her father. There is also Lucas Telling-Stone who is a mute, that specializes in learning about vampires and also weaponry, he can communicate by telepathy and Enzo Ferrara, a former priest who specializes in knowing how to kill every type of vampire. He explains they plan to kill Dracula, but Blade intervenes and is allowed to join because he is the only one who has fought Dracula before. It is then revealed that Noah's full name is Noah van Helsing and the woman that Blade met earlier (who is also on the team) is named Divinity Drake and is a human descendant of Dracula.

Retrieved from "https://heykidscomics.fandom.com/wiki/Tomb_of_Dracula_Vol_4_1?oldid=1465019"
Community content is available under CC-BY-SA unless otherwise noted.