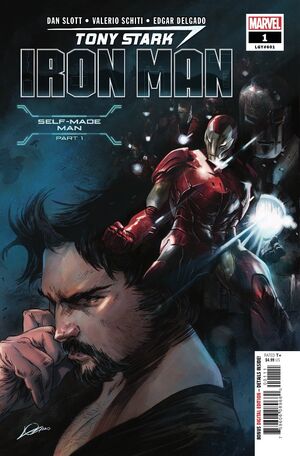 This is Iron Man. It's not a suit. Iron Man's an idea. Ever changing. And limited only by our imagination. I say "our" because Iron Man is an idea we all share at Stark Unlimited. It's all of us and everything we do here. We are Team Stark and... We. Are. Iron Man.

Appearing in "Self-Made Man: Part One – What's the Big Idea?"Edit

From the cusp of tomorrow’s dreams to the forefront of imagination, one man always soars on the cutting edge of adventure!

You know his name. Tony Stark is Iron Man.

And Iron Man… is an idea. Always changing. Always evolving. An idea without limit!

Take wing with DAN SLOTT (AMAZING SPIDER-MAN) and Valerio Schiti (GUARDIANS OF THE GALAXY) as they propel the ultimate Self-Made Hero to new heights of inventiveness!

Tony Stark is Iron Man. The future is now. Strap in! 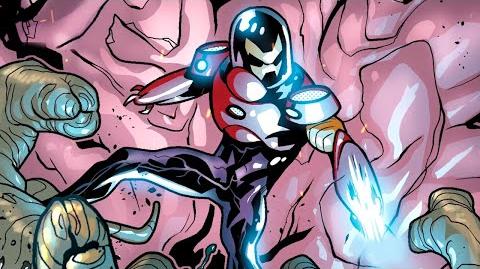 Retrieved from "https://heykidscomics.fandom.com/wiki/Tony_Stark:_Iron_Man_Vol_1_1?oldid=1676718"
Community content is available under CC-BY-SA unless otherwise noted.