Start a Wiki
Part of the 'Self-Made Man' story arc 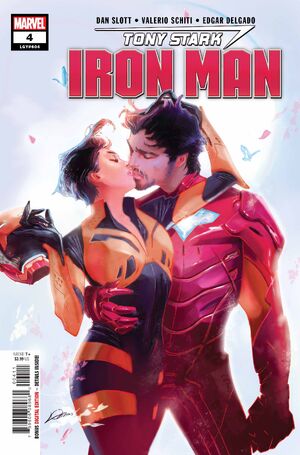 Everyone thought I was gone. But I was lost in the Microverse. And when I came back... the way I got through it was by not picking up where I left off. I saw it all as a second chance.

• You wanted to know who the book’s love interest is going to be? Here you go. The one, the only... Janet Van Dyne! A love not seen since AVENGERS #224 is about to be rekindled.

• And what’s going on with Sunset Bain’s new dating app? Some of these online matches are just a little too good to be true...

Retrieved from "https://heykidscomics.fandom.com/wiki/Tony_Stark:_Iron_Man_Vol_1_4?oldid=1677054"
Community content is available under CC-BY-SA unless otherwise noted.