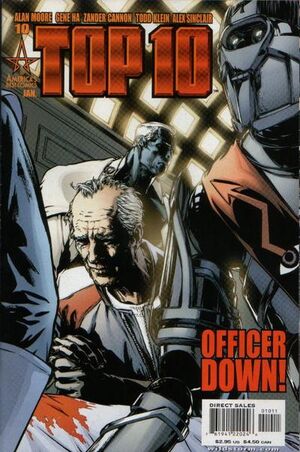 No, sir, commissioner, sir. No, I don't think this is going to come to trial.

Appearing in "Music for the Dead"Edit

Synopsis for "Music for the Dead"Edit

Officers Jeff Smax and Toybox arrive at a nightclub in response to a call that a body was found in the parking lot. They find the dead body of rock star Glenn Garland, obviously doctored to look like he committed suicide. Smax tells Slinger it's going to be a long day, especially since they are expecting a visit from the police commissioner later.


Smax and Slinger return to the precinct house with Garland's Hyperdrene mites, side effects of a drug he was taking, in the hopes that they can be interrogated to learn more about Garland's murder. Shortly after roll call, police commissioner Ultima appears. Captain Jetman gives her a tour of the facilities, and when in the mess hall, Synaesthesia tells Ultima she is being placed under arrest for the murder of Stefan Graczik. The Captain is befuddled and as he is dressing down Synaesthesia, Ultima powers up and shoots a blast of power at Synaesthesia, but Girl One dives in front of Synaesthesia and is killed. Smax requests permission to use extreme force and Captain Traynor grants it.


Smax approaches Ultima and reads her the Miranda Act. She fires a burst of energy at him, sending him two walls. He gets up and approaches her again, firing a burst of energy from his chest that knocks her through a couple walls, into the detention cells. While there, Ultima kills one of the guards. She and Smax face off, and she tells him to give her a drug called Xenite. She says if she is given the drug she won't destroy the city. While Smax fights Ultima, Slinger suggests giving Ultima what she wants. Her reasoning being that the drug may calm Ultima down, or cause her to nod off. Captain Traynor decides its as good a plan as any and tells Slinger to put it into effect. While Ultima is distracted by Smax, Slinger sends one of her toys with a syringe to inject Ultima with Xenite. As she is passing out, Ultima gathers energy for another blast, aimed at Slinger, who orders her toys to form a protective shield. The blast causes the surrounding doorway and wall to cave in on Slinger.


Under the rubble, Slinger is wounded, but alive. Another figure, reveals itself to be trapped in the rubble with her. The figure tells Slinger it is called Rumor.

Retrieved from "https://heykidscomics.fandom.com/wiki/Top_10_Vol_1_10?oldid=1106580"
Community content is available under CC-BY-SA unless otherwise noted.