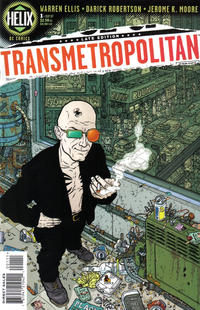 Contract? You'll never get a city hitman up the mountain to me -- you bastards die if there's actual oxygen in the air.

Appearing in "The Summer of the Year"Edit

Synopsis for "The Summer of the Year"Edit

Spider Jerusalem is a "gonzo" journalist who has forsaken society, preferring instead to live the life of a paranoid recluse in the mountains. He receives a telephone call from his publisher reminding him that he is still contracted to produce a novel for them and his time is running short. Begrundgingly, Spider returns to the City and visits his old editor Mitchell Royce. He needs his old job back so he can assimilate himself back into the journalistic lifestyle. Spider demands a new apartment, fresh materials and journalism insurance. Royce provides all of these for him and after a shave and haircut, Spider is ready to expose the "truth" of the world once again.

Spider taps into a newsfeed and learns about an alien genome fetishist named Fred Christ, who is leading a secessionist movement of "Transients" in the Angels 8 District of the City. Spider decides that Fred will be the subject of his next column.

Retrieved from "https://heykidscomics.fandom.com/wiki/Transmetropolitan_Vol_1_1?oldid=1473375"
Community content is available under CC-BY-SA unless otherwise noted.