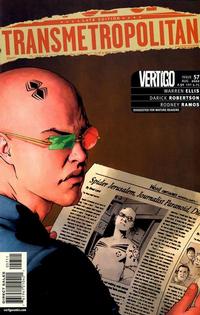 You may have noticed my brain is no longer pristine.

Appearing in "Headlong Three of Three"Edit

Synopsis for "Headlong Three of Three"Edit

The National Guardsmen open fire on protesting college students. Mary sends some interesting pictures to Spider Jerusalem, which contain the identity of Vita Severn's murderer! Spider and crew make their escape, while Oscar Rossini and Lau Qi stay behind to get arrested after they post the pics on The Hole.

This title is Suggested for Mature Readers.

Retrieved from "https://heykidscomics.fandom.com/wiki/Transmetropolitan_Vol_1_57?oldid=1473431"
Community content is available under CC-BY-SA unless otherwise noted.