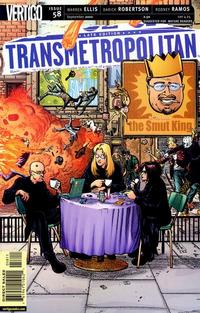 Some people want to rule just to rule. Some people pick the wings off flies just to see what happens.

Appearing in "Straight To Hell"Edit

Synopsis for "Straight To Hell"Edit

Spider Jerusalem has nowhere left to run. Luckily for him, following Robert McX's lead, every newsfeed in the country has flooded the internet/airways with footage of the unarmed college students being murdered by the National Guardsmen. President Callahan (aka The Smiler)'s impeachment is being called for.

This title is Suggested for Mature Readers.

Retrieved from "https://heykidscomics.fandom.com/wiki/Transmetropolitan_Vol_1_58?oldid=1473432"
Community content is available under CC-BY-SA unless otherwise noted.