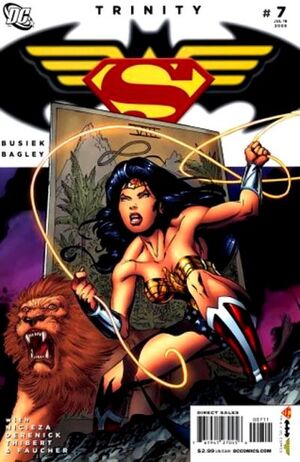 Appearing in "A Third Symbol Now..."Edit

Synopsis for "A Third Symbol Now..."Edit

Synopsis for "Away From Creation"Edit

Firestorm searches for Green Lantern John Stewart in the Hall of Justice finding him in the "kitchen" fighting numerous holographic Qwardian Thunderers--with the safety protocols bypassed. He shuts down the program, then explains to that he was trying to recreate the "odd power manifestation" he experienced in his battle with Konvikt[1] via excessive stress, but believes it didn't work because he knew himself not to be in any true danger. That explained, Firestorm asks about Krona, whom he looked up after hearing Stewart and Superman discuss him but didn't see why he would come to their minds.

To explain, Stewart takes Firestorm into the Oan archives and allows him to experience Krona being tried on Maltus by the Guardians of the Universe for seeking the forbidden knowledge of the origins of the universe. After responding that he "doesn't care" and will never stop searching for the truth Krona is found guilty and, as he is immortal, banished for all eternity as disembodied energy forced to circle the universe endlessly. As he does so Firestorm feels his anger, boredom, and exhaustion while he watches millions of civilizations grow, evolve, and fall, always progressing and never being allowed his goal, to witness the "birth" of the universe. Firestorm also feels Krona's various escapes; including the first one foiled by Green Lantern Hal Jordan, and the time he attempted to merge the DC and Marvel Earths.[2]

As they reach the end of the archive account, Krona's defeat by "the League and others", Firestorm and John Stewart both suffer great pain and Krona screams, from the Cosmic Egg, "Let me out!!" Once again, Stewart loses control of his powers and speaks in binary, with blades appearing from his uniform. When they recover a confused Stewart checks his back and the blades are gone, then explains to Firestorm that Krona is trapped in "N-Space" in the Cosmic Egg with the idea being it'll hatch into a universe, he'll see it born, and be satisfied.

Firestorm calls it up on the monitors, and leaves it up when they go. A closer look reveals that the monitors watching the Egg are actually broken.

Retrieved from "https://heykidscomics.fandom.com/wiki/Trinity_Vol_1_7?oldid=1672759"
Community content is available under CC-BY-SA unless otherwise noted.