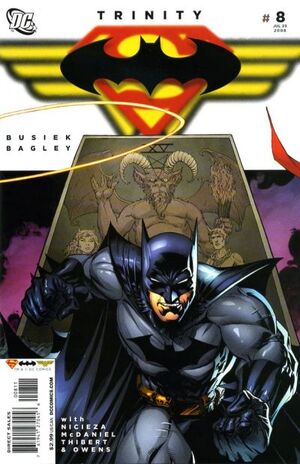 Appearing in "Have You Tied Him Up Yet?"Edit

Synopsis for "Have You Tied Him Up Yet?"Edit

Synopsis for "Dreams of Power"Edit

In a tattoo shop, a man named Hemi Kiwari tattoos his own arm while chanting Tama-nui-te-rā, the Maori name of the sun, "riding the pain". Primat, an ape, reads a romance novel in Gorilla City and daydreams of another place. And in a prison, heroin addict Michael Cannefick begins his withdrawals but remembers the times being high.

Despero, Enigma, and Morgaine le Fey have gathered at Castle Branek to begin their work "reordering" the Multiverse. Le Fey explains that The multiverse's keystone is their universe, the universes keystone is the planet Earth, and Earth's keystone is the Trinity--or they can be made to serve that role. When Despero notes that he has beaten all three of them separately, le Fey says it's not about "brute force" but metaphysics and usurping their power with the power of the Cosmic Egg.

After Despero attempts to get a larger piece of the power, le Fey shows him to a chamber where Tarot is spellbound after being brought in by Howlers. She tells him that Tarot is a conduit to the Worldsoul, but doesn't know the extent of her powers, and believes she's giving readings to people from her neighborhood, allowing them to extract information. A minion relates information from Tarot to le Fey about entwining the Trinity in spells. Enigma decides it makes sense as soon as he hears it, but Despero is disbelieving in the Worldsoul and demands an explanation. Before he can get one, Enigma interrupts with the news that they're ready with the Cosmic Egg. He tells Despero that until now they've been using operatives he's "familiar with" on the tarot robberies, but now they'll need to use their own and, with his cane, releases cosmic energies to seek out "lost and troubled minds ensconced in dreams of power" to create foot soldiers.

Despero wonders about the dreams, asking what stops the others from dreaming from dreaming about them. Enigma tells him not to worry, they're having some kind of dreams at the very least, but they've taken "extreme measures" to distract them. Le Fey asks how he could could do that, which he dismisses in favor of the more important matter of the Cosmic Egg and their soldiers, one of whom is dropping from the egg as they speak, whispering "Tama-nui-te-rā"...

Retrieved from "https://heykidscomics.fandom.com/wiki/Trinity_Vol_1_8?oldid=1669515"
Community content is available under CC-BY-SA unless otherwise noted.