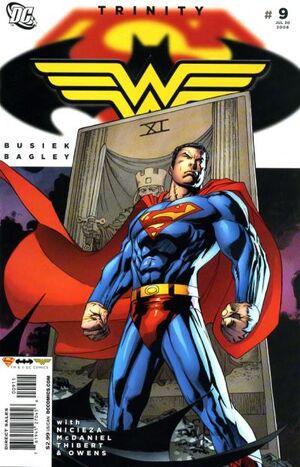 Appearing in "Crumbs in the Forest"Edit

Synopsis for "Crumbs in the Forest"Edit

Synopsis for "Making the Pieces Fit"Edit

From her Platinum Flats headquarters, Oracle coordinates a number of heroes as they surveil various Gotham villains. As he moves from one building to another, Nightwing's cable is cut. After he recovers, Swashbuckler appears and the two begin an acrobatic fight during which Swashbuckler slices one of Nightwing's escrima sticks and removes his mask with the tip of his sword. Calling his "task complete" Swashbuckler begins fleeing, only to have to have a voice activated self-destruct destroy his "prize". He calls their meeting a draw on his exit, throwing the tracer Nightwing placed on him back at him.

Oracle calls her father, who informs her that he's found nothing on the Penguin being involved in the string of museum robberies. As their talking, a spectral arm enters the room and makes off with the Commissioner's pipe.

Deciding to go straight to the source, Oracle sends Robin to ask Penguin directly, and he denies involvement "regardless of [his] numerous inquiries." As he's asking, Oracle hears of a riot in progress at Arkham Asylum.

Inside the Asylum, Swashbuckler holds off a number of guards as another man, the Trans-Volitional Man, walks through a wall into the cell of the Joker. When the Joker laughs, "T.V.M." reaches out and literally plucks his laugh from the air. When Robin arrives, Detective Harvey Bullock shows him to the Joker's cell, where he says he's probably be better off had he been killed, with the Joker choking in vain attempts to produce a laugh.

Retrieved from "https://heykidscomics.fandom.com/wiki/Trinity_Vol_1_9?oldid=1669303"
Community content is available under CC-BY-SA unless otherwise noted.