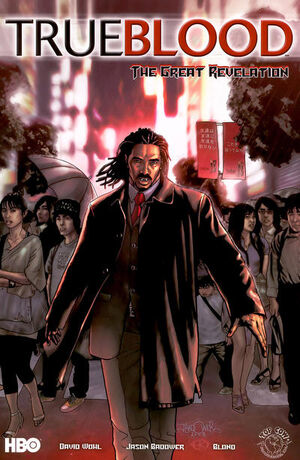 Appearing in "The Great Revelation"Edit

Synopsis for "The Great Revelation"Edit

A Japanese corporation develops a process to create synthetic blood. Those who benefit the most from such an invention are vampires who can now acquire nourishment without having to feed on humans. Affluent Japanese vampires are quick to buy up the patents and this leap in science enables them to safely "come out of the coffin" and reveal themselves to the public. The revelation of the existence of vampires has a variety of effects on the general populace. Some are thrilled to know that vampires are real, others are curious about their lifestyle, but many are also dubious and often hateful. Although this synthetic blood substitute, dubbed Tru-Blood, provides vampires with nourishment, some vampires instead prefer gaining their food supply from living sources, namely humans. This too, causes a schism within vampire culture.

Retrieved from "https://heykidscomics.fandom.com/wiki/Trueblood_Vol_1_1?oldid=1475457"
Community content is available under CC-BY-SA unless otherwise noted.