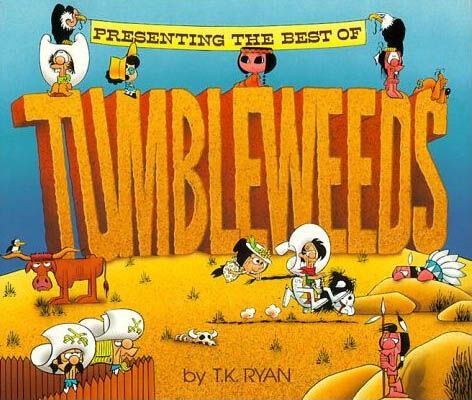 Tumbleweeds was a popular long-run comic strip which offered a skewed perspective on life in the Old West. Writer-artist Tom K. Ryan (1926 - ) (who signed the strip "T.K. Ryan") was very familiar with conventions of the Western genre he satirized. Launched September 1965, the strip was distributed for decades initially by the Register and Tribune Syndicate and later by the King Features Syndicate after its acquisition.

Jim Davis, who created Garfield, was Ryan's assistant (from 1969 to 1978) while developing another strip, Gnorm Gnat.[1]

Tumbleweeds is set in and around the town of Grimy Gulch, whose population was stated at 49 (later it was marked out and added to 50), in an unspecified Western territory. Other locations include the nearby village of the Poohawk tribe of Native Americans, and the US Army outpost Fort Ridiculous, manned by the 6 7/8 Cavalry.

Appearances in other media

Tumbleweeds was to be one of the strips animated in Filmation's 1978 series The Fabulous Funnies (along with Broom-Hilda, Nancy, Alley Oop and others) and was included in the series' premiere episode with Alan Oppenheimer doing the voice of the title character. However, after the first episode aired, it was learned that Filmation lacked the rights to use the property, and the segment was removed from future episodes.

Tumbleweeds Gulch became an MGM Grand Adventures Theme Park attraction, and the strip also was the basis for a Las Vegas stage show. In 1983, Tumbleweeds was adapted into a musical comedy for high school productions by the same company that adapted the strip Luann.[1]