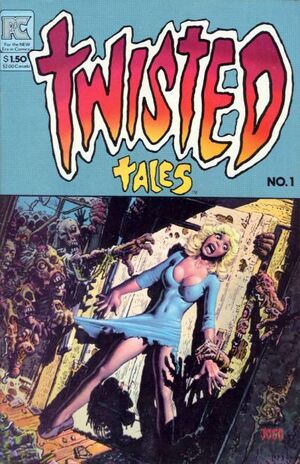 1 of 3
Add photo
A California collection agent meets a young woman walking down a shoreside highway he wishes to have sex with who has had crabs...literally.

Appearing in "Out of His Depth"Edit

Synopsis for "Out of His Depth"Edit

A woman loses her mind when confronted with the rotting zombie of her husband when he returns for his denied wedding night. Although she thought he had poor hygiene in life, her last thought before he climbs on top of her and she screams is that, "I wish I'd let him have me while he was alive when he didn't smell so bad."

Appearing in "A Walk in the Woods"Edit

Synopsis for "A Walk in the Woods"Edit

Every seven years on Halloween in a small town a group of undead children come and claim one of the kids who were involved in a prank which lead one of the group to being burned to death. The kids pour gasoline on their designated victim and light him on fire.

Retrieved from "https://heykidscomics.fandom.com/wiki/Twisted_Tales_Vol_1_1?oldid=109679"
Community content is available under CC-BY-SA unless otherwise noted.